The base premise of Dragon Maid alone is absolutely charming and hilarious. A firebreathing dragon named Tooru becomes a maid for a jaded salary worker named Kobayashi who lives on her own, and the dragon turns out to be a giant awkward goof and the two live together and become good friends (the dragon of course has a semi-human form, as do all the other dragons in this show). This alone would be worth a good chuckle and perhaps an episode or two, but as always Kyoto Animation are the masters of elevating light premises through pure good craftsmanship. The aesthetic of the series immediately sets an upbeat comforting vibe, leaning into Lucky Star-esque clean lines and basic colours interspersed with some of the underlying earthy tones that tend to populate many of their productions.

Everything is slickly animated with a myriad of tiny details, lending both a sense of fullness to the show’s world and characters and smartly subtle comedic pacing. The latter is especially important given how anime tends to fumble with adapting punchlines from manga. Jokes that come out snappy when you read them often become limp when accounting for colour and movement and other audiovisual elements. But looking at adaptations like Dragon Maid you find that not only are the jokes just as sharp as they initially were but also often punchier thanks to a willingness to push what works in the more substantial audiovisual form of anime. Perhaps my favourite part of this adaptation is the way its mellow tone and setting gel with the ridiculously scary and powerful dragons. Every so often you’ll be assaulted with a huge stunning animation setpiece of the dragons doing superpowered dragon stuff, and every time it perfectly sells those moments for how ridiculous and out of place they are. The fundamentals of Dragon Maid are absolutely on point.

But it’s not just KyoAni‘s efforts that make this show work, it’s also the content itself. It doesn’t simply bank on the silliness of Kobayashi and Tooru’s relationship, but it instead brings in other dragon and human characters to fill out a fun ensemble cast. Kobayashi becomes a mother figure to the adorable Kanna, and we see other dragons like Elma and Fafnir come along to point out how ridiculous it is that a dragon is casually living with humans only to themselves become sheepishly accustomed to human life. Each new character quickly blends into their surroundings to become another lovable part of a silly world where dragons just happen to want to hang around with humans.

The sexual undertones only get worse when the show starts teasing relationships involving children, with the relationship between Lucoa and Shouta in particular coming off as straight up predatory. These forms of uncomfortable sexual content are so common in anime that we tend to just think of them like bread and water, like they’re just meant to be there. But thankfully I’m not the first person nor will I be the last person to say that this stuff just ain’t cool. Being aware of this stuff doesn’t mean not enjoying anime that contain those things (I’ll be damned if I’m gonna stop watching Monogatari), however I think it’s necessary to continue pointing out trends in anime that are shunned for valid reason.

There’s also some heavy-handed dramatic moments here and there that don’t hit the spot, with the last episode especially being an unfortunate downer for much of its run-time. It almost makes up for it with KyoAni‘s spectacular composition and framing… but only almost. Ultimately it strays too far from the general light tone without really earning much of  its mopey sentimental stuff. To its credit, though, there are a lot more light drama moments that hit the mark. The small conflicts and the subtle sentimental moments give it that little bit of emotional depth that leaves a lasting impression, the impression that no matter how gag-driven and cartoonish these characters are you still feel like you actually kinda know them. KyoAni gracefully makes those tiny moments of reflection a natural part of the show’s slice of life comedy ecosystem, if not making the show touching surely making it worth remembering. 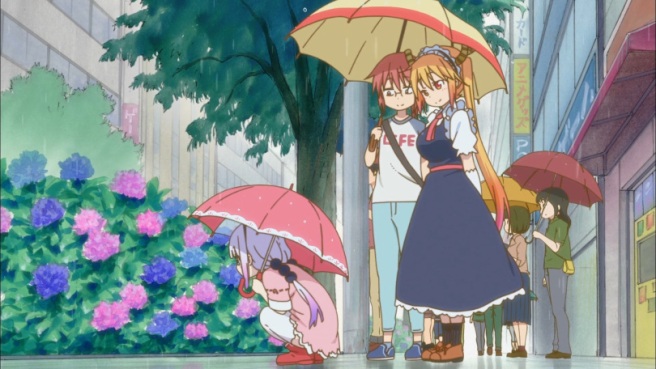 Miss Kobayashi‘s Dragon Maid is yet another strong cozy gag series from KyoAni, and one built on a genuinely fun premise that fully delivers. It occasionally delves into uncomfortable territory or aims for drama too heavy for the show’s premise and execution to handle, but in the end it always reminds you of its glorious silliness and warm sincerity. Dragon Maid is a good little show.