Let’s talk about slice of life anime. Yes, that slice of life. The one allegedly responsible for the fiery death of the anime industry a few years back. It’s no secret that a lot of anime fans don’t really care for slice of life shows. Heck, some would go so far as to say it’s a genuine threat to Good Creators and their ability to make Good Anime. But what if I actually like these shows? This led me to think more about the reasons why I watch slice of life things, and after some soul searching I realised that I still like my cute stuff. A lot of these shows are a hard sell to anyone who hasn’t already sold their soul to the moe gods, but maybe just maybe there’s something to appreciate.

The typical slice of life series is the 4-koma manga adaptation. 4-koma manga usually involves a series of four small comic panels that lead into a quick gag. The scene is set, the foundation is built, the punchline is delivered and the outcome ties everything together.  This is the popular format for slice of life manga, and tends to be good at carrying stories with cozy lighthearted tones. One of the earlier high school slice of lifes to come out of this format was Azumanga Daioh. Azumanga Daioh like many of these works is about a group of teenage girls and their quirky but mundane everyday life. Azumanga Daioh‘s punchlines are simple, which is totally okay for what it is, but sometimes the jokes are so straight that adapting them into animation takes away their foundation. There’s a lot more to account for when you add in colour and animation and sound, and trying to build natural scene pacing within those structures often works against the rapid delivery that these gags often demand. The Azumanga Daioh anime, while mostly a solid adaptation, has issues with leaving the bones of the 4-koma format bare.

In episode seven lover of all cute things Sakaki meets Chiyo’s dog Mr. Tadakichi. What follows is a sequence where Sakaki becomes so infatuated petting him that Chiyo has to intervene. It’s still quite funny, but it doesn’t pack the same punch as the source material. Whereas the manga only dedicates all of the few seconds it would take to read this one little comic strip the anime expands the punchline to around a minute.  This isn’t to discredit long uncomfortable silences as their own source of humour, but it doesn’t really mesh with this joke’s thin amount of content. It’s chuckle-worthy and cute and all, but there’s not a whole lot to the execution. Despite all that, these works continue to be appealing for their simple silly cuteness. I sometimes consider myself one such fan, but it’s still a tricky sell.

So why am I saying that there’s secretly something more to this? Well, because Kyoto Animation. Not only can KyoAni take credit for popularising this genre but they could also pretty fairly claim to be the masters of it. You might think that’s a pretty dramatic take, but god damn it’s one I’m willing to own. And I’m not the only one. I’ve sampled other slice of life shows with friends who aren’t as into anime as me and the response is usually disinterest and ridicule, but as soon as I break out K-ON! the mood changes. I asked one friend why and they said “because stuff actually happens”. That might be a surprise to anime fans who’ve made it the butt of a years long slew of It’s A Show About Nothing jokes, but the craft and density of K-ON! resonates with people. And we can thank director Naoko Yamada for that. Where a whole lot of directors fumble in adaptation Yamada shines, taking even mundane works and giving them a sense of presence that can only come out through animation. Yamada doesn’t just adapt gags, she fills the spaces in between them.

This can all be seen in K-ON!‘s sense of visual space and the way body language is framed. In the first 30 seconds we already understand main character Yui and the space she occupies. We begin with a shot of a girls’ middle school graduation photo, our ears filled with the echoes of birds chirping and a ticking alarm clock. The alarm clock goes off as the scene pans across various objects in the dimly lit bedroom. A peculiar doll, a school uniform, a pair of leggings sloppily draped on a chair, and a bag sitting on a desk. Before we even physically see Yui we know it’s the morning of her first day of high school, and we know she’s clumsy and kind of an oddball.

And then we cut to Yui, squirming underneath the covers as she greets the alarm with a reluctant sigh. A desperate hand reaches from under the covers, just barely out of reach of the alarm clock. Our attention is brought to the hand, and in a single half second motion Yui musters all her strength to reach out, knocks over the alarm clock and then clutches it by the snooze button. Her work is done, and so our focus zooms out as she relaxes her hand and drifts back to sleep. In 30 seconds of animation, without a single word, we deeply experience the morning of Yui’s first day of school. And we’ve already built a solid picture of her eccentric airheaded personality.

Throughout the rest of K-ON!‘s two minute intro sequence these subtle motions build on each other. Yui slips on the wooden floor trying to race to school, and then sheepishly picks herself up again. We see her furiously dashing to get to school, interposed with half second cuts of her getting distracted by a cat on the side of the road and helping an old lady cross the street. We see her panning her head across the entire room during the entrance ceremony. She leans forward, twists in her chair to look behind, and gradually turns her head to each side in sheer awe of her new high school surroundings. Yui Hirasawa isn’t the most nuanced and complex character in all of anime, but that’s not the only way to build a good character. A good character can also be built through visual texture and detail. Everything about who Yui is gets told succinctly and fully through a build-up of understated human gestures. Not only does that get its point across just as swiftly as a light obvious 4-koma gag, but it gets its point across better. It takes a simple character premise and it makes it extremely resonant. 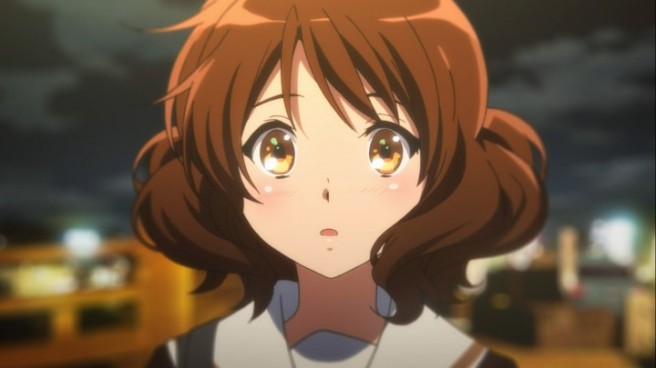 Slice of life isn’t just cute girls being silly though. Everyday life has a lot of stories to tell after all, and KyoAni can probably tell all of them. Although they tend to fixate on stories about the lives of high schoolers they’ve managed to get a ton of mileage and genre variants from that. The screwball comedy of Nichijou; the mundane mysteries of Hyouka; the goofy but warm romantic comedy of Love, Chunibyo & Other Delusions; the intimate ensemble drama of Sound! Euphonium. Each a different slice of life.

I could talk about the scene in Chunibyo where former social outcasts Yuuta and Nibutani both self-consciously go to the mirror at the same time on their first day of high school. Or the scene in Euphonium where an initially awkward and distant conversation between Kumiko and Reina leads to Kumiko forcefully trying to close the distance between them before Reina finally accepts her with a overpoweringly warm smile. There’s so many moments in their works that embody a sense of humanity that words can’t do justice. Whether they’re being humorous or earnest KyoAni know how to intimately portray life.

But maybe you’re bored with all these anime about teenagers, maybe you’re an adult who wants something you can actually relate to. Then allow me to suggest Shirobako. Shirobako is probably the ultimate slice of life about how being an adult sucks, but also about how we do our best anyway (and a whole bunch of other things I’ll totally get into). It begins with our main characters as high schoolers, glowing with optimism and working their way towards their dream jobs in the anime industry. Cut to several years later when they start to get their foot in the door, and it turns out their dream job isn’t quite as magical as it seems. Their dream job is still a job, filled with seemingly impossible deadlines and unreliable collaborators and tons of sleepless nights.

Shirobako doesn’t hold back on the sentiment that sometimes your dreams aren’t quite what they seemed. It doesn’t glamorise or dramatise working in the anime industry or adult life. It depicts them sincerely and sometimes in painful detail. Life isn’t totally miserable though. Shirobako recognizes that, and it balances its blunt reflections with a charming cast of characters and a good-natured sense of humor. While Shirobako doesn’t create the kind of moment to moment character resonance of KyoAni’s best triumphs it does present something that KyoAni probably never will: an honest down to earth slice of life story about adults. Adult slice of life is relatively sparse territory for anime but there are still plenty that exist (just this year we’ve been gifted Sakura Quest and Recovery of an MMO Junkie). After all this genre offers as many possibilities as life itself, and then some.

Maybe what you look for in anime are action and thrills, or bold weirdness, or a whole range of other things that might do a lot more for you than these relatively mundane tales about regular life. I appreciate anime for those things as well. But hopefully I’ve shed some light on why others enjoy slice of life anime. An anime can be special to someone in one way or a million, and it’s worth sharing all of them.

6 thoughts on “Let’s Talk About Slice of Life Anime”