I don’t know if this is as much of a thing anymore, but back in the day there were a lot of people who really couldn’t stand Neon Genesis Evangelion’s religious imagery. People would call it pretentious, say director Hideaki Anno was a hack who was trying too hard to be deep, all around try to discredit it as a thing to be made fun of. Considering Evangelion is on its way to Netflix I figured it was a good time to talk about that subject.

I think part of the reason people point to the religious imagery when they talk about not liking Evangelion is because it’s a tangible detail. Film Crit Hulk summarised this habit super well, but basically when people don’t have the vocabulary to describe why they don’t like a piece of media they tend to bring up these tangible details. I say this because I was totally one of those people years ago. As a teenager I didn’t like Evangelion as much as I do now, and the surrounding discourse making fun of the series was contagious. Amongst all the things going on the flurry of giant crosses and allusions to Christianity were the most obvious target. As I became more patient with media that challenged me I came to like Evangelion a whole lot more. Eventually I realised that I never had any serious issues with the imagery to begin with. It just happened to be a convenient outlet for ranting about the show.

That’s not to say that liking Evangelion is some sign of maturity. Some people will never like the show, and that’s fine! I’m also not implying that people are stupid and wrong for not being able to articulate their problems with media. As a matter of fact, I think people should be more okay with not having the words to describe their problems with fiction. In the digital age hot takes translate to cultural capital. Even if we don’t fully believe what we’re saying, there’s something alluring about putting out a strongly worded opinion and being validated by strangers on social media who agree with us. But honestly, it’s okay to just say that the 25-year-old cartoon isn’t your thing and move on with your life. At some point having the spiciest opinions loses its fun.

More importantly, though, I think the idea that religious imagery is an attempt to look artsy and intellectual is kind of western-centric. Japan arguably has a much more passive relationship with spirituality than we do. People in modern Japan tend to be less devout in their religion, not abandoning faith entirely but being very casual in upholding it. Hence why it’s not all that controversial for Hayao Miyazaki to load his films with allusions to Shinto and Buddhist faith. Also, Christianity isn’t all that popular in Japan. So while we might see Christian imagery as this annoyingly pervasive cultural force, it holds a totally different meaning to most Japanese people. Similar to how Miyazaki’s spirituality moves western audiences, Japanese audiences tend to view the Christian images of Evangelion as more novel and profound.

It’s not surprising that some people can’t shake those ideas of Christian images though. But in truth Evangelion doesn’t strive for the shoddy symbolic goals that we tend to associate with putting giant crosses everywhere. Some folks have pointed to this as proof that the series is some sort of joke, but you really don’t have to push convoluted symbolism to have a creative purpose. In this case the creative purpose is ATMOSPHERE. One of the most obvious things that makes Evangelion special is how thickly layered its atmosphere is, how almost every shot and sound contributes to its overpowering tone. Part of that is the looming idea of apocalypse. 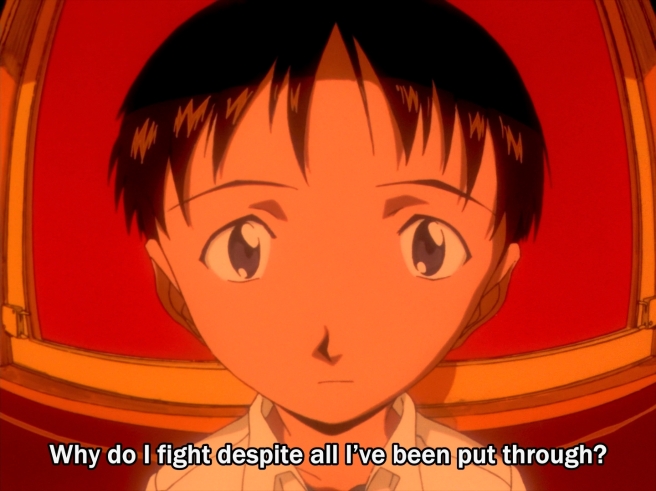 There’s the literal apocalypse of the second and third impact, but there’s also the apocalyptic overtone of its character arcs. When you’re socially isolated, especially when you’re a teenager like Shinji Ikari, it can literally feel like the end of the world. It can feel like this is all you’ll have for the rest of your life. This isn’t a vague metaphor I wrote into the series, it’s the dominant overtone to how the characters talk about their loneliness. When Misato goes back to her toxic relationship with Kaji she uses the excuse that she can’t help her “carnal desire” to fill the hole left by losing her dad. So basically, these characters feel so eternally doomed to be broken and lonely that the world might as well be destroyed in an apocalypse. It’s… heavy stuff.

There’s a whole lot of apocalypse in the bible, so it makes sense that Evangelion would connect the two. But more to the point, I don’t think the apocalyptic tone would be as profound without the intense visual motifs. It makes the end of the world a spiritually haunting experience, something that goes beyond what living humans can comprehend. Without any words, the images convey a genuinely scary existential feeling. I think that feeling is a huge part of why Evangelion continues to move people. Even if they can’t describe it, they know that the series had an unshakeable impact on them.

It’s hard to deny that Neon Genesis Evangelion is messy. Some people are going to be bothered by some of the things it does, or even straight up turned off. If you’re one of those folks and you still want to trash the religious imagery… do whatever you want. I’m a rando on the internet, not your mother. But honestly, I don’t find those takes all that convincing. We need to stop trying to expose earnest fiction as some overblown fraud when it doesn’t work for us. Creators put a lot of themselves into their work, so it sometimes helps to not be a jerk.

Did you like this piece? I’ve written some other things about Evangelion that you can read here and here.

If you wanted to commission me to write about something you can message me on Twitter @BristleBristle. TV shows, films, anime, western cartoons, whatever you want (within reason)! You can find more details here.