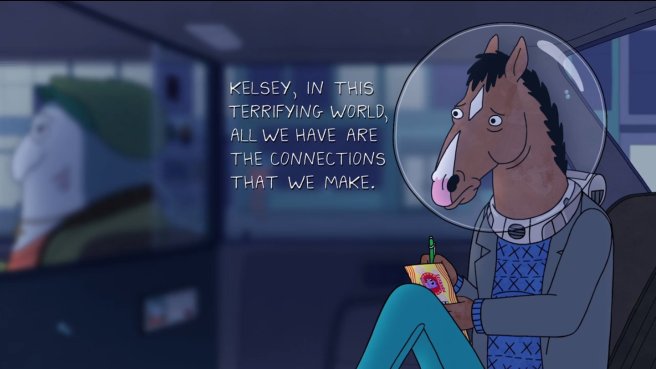 I have no hesitation when saying there has never been a better time to be a fan of western animated television. More things have grown on me, blown my expectations away, touched me and brought me to tears from this medium than ever before. But none with the sheer emotional gravitas of Bojack Horseman. That a sneering pop culture satire built around so many unlikeable individuals could carry this much sincerity and vulnerability itself is a feat well beyond many of its peers, but that it never lets go of that dignified seriousness and takes it into so many dark and extraordinary places is what puts it at the apex of its craft. ‘Fish Out of Water’ is at once one of the most ambitious and most tragic episodes of the series. It’s wonderful, it’s funny, it’s experimental, it’s deeply painful, it’s Bojack Horseman.

The first thing of note is the complete lack of dialogue in between its intro sequence and the end of the episode. Bojack is thrust into the confusing and distant underwater land of Pacific Ocean City, unable to communicate with the seafolk in their native murmurs. Thus what we’re left with is mostly what happens on the screen. As a visual comedy fuelled episode it’s actually much more in the tradition of western animation than the rest of the series, and yet it comes off in the context of Bojack as surreal.

One of very few verbal cues this episodes goes off of is the offensiveness of giving a thumbs up in Pacific Ocean City. The payoff to this comes in an early sequence where Bojack gives a thumbs up while being shot by the press, creating a humorous undercurrent of background media outrage while Bojack runs around completely oblivious in his own headspace. This fulfils the punchline of the gag, but more than that it’s a subtle touch to the sense of culture shock that Bojack goes through in this episode. One of the greatest strengths of ‘Fish Out of Water’ is that it earnestly captures the feeling of being lost and alone in a foreign country. It does this both through its wacky surrealism and a deep-seated atmosphere of isolation. Their language and architecture looks almost like ours but not quite, a male seahorse gives birth on a bus and immediately gets off to go to work,  a sense of distance constantly looms over the framing of Bojack. 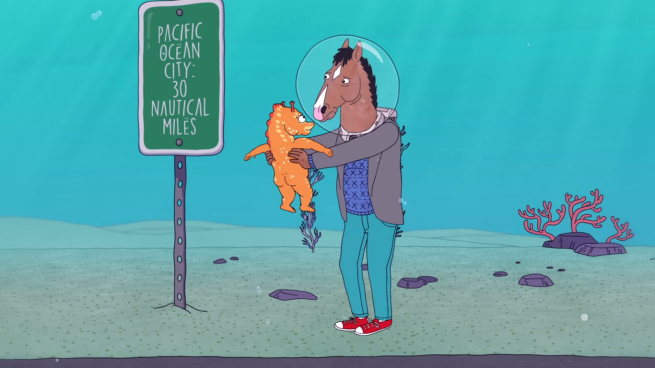 More interesting than all of that, though, is the underlying character arc. During that aforementioned scene of the seahorse giving birth one of them strays from the pack and begins to follow Bojack around. We get the cliche visual routine of Bojack trying to leave the baby behind but being followed despite his best efforts, which comes off as rather sweet in the context of a gritty adult-oriented series such as this. Over the course of much of the episode Bojack has to care for the seahorse, feeding it and playing with it and slowly building a connection through various vignettes.

When the journey reaches an end and Bojack finds the father he’s visually distraught that he has to leave it behind. There’s no emotional farewell, it just happens. Bojack has finally experienced the joy of having a child for himself, and now he realises he may never have it again. He’s finally free to relive his old lifestyle of fame and excess, but as a fifty-something year old with a string of failed relationships the validation of settling down to start a family will likely never come. And that’s the life he has to come to terms with.

This brings us back to the actual conflict of the episode, Bojack attempting to reconcile with Kelsey. In a moment of desperation and loneliness Bojack is stripped down to his true self and writes the words he’s been wanting to say:

Kelsey, in this terrifying world, all we have are the connections that we make. I’m sorry I got you fired, I’m sorry I never called you after.

The real Bojack is in ink, and he finally gets the message to Kelsey. She appears upset by Bojack’s presence, drops her guard at the sight of the note and then promptly sours and rides off. The note had already washed off. Bojack wanted to redeem himself with the best and most pure of intentions, but he was a tragic victim of circumstance.

The powerlessness of not being able to reconcile after falling out, even when deep down it once seemed possible, is one of the most poignant truths underlying Bojack Horseman. It’s a theme that Bojack continues to run into with those he cares about, one that follows him wherever he goes because he’s unable to express how truly scared and fragile he is. ‘Fish Out of Water’ is an episode that at once contains some of the most warm and most somber moments in Bojack Horseman, a brilliant stylistic episode and one of the most narratively moving pieces in the entire series.