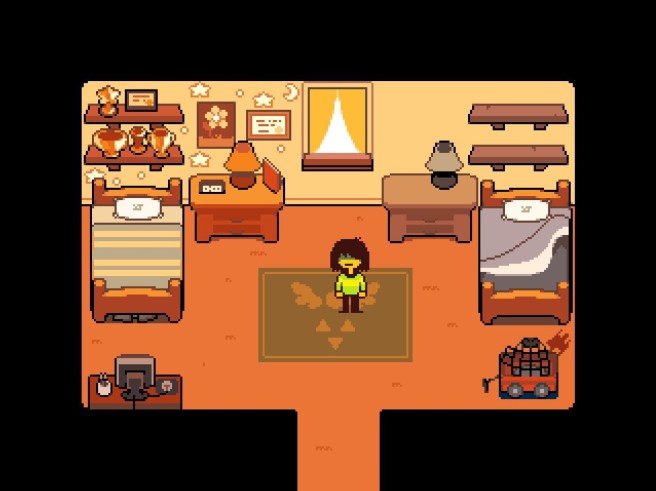 THIS ANALYSIS CONTAINS SPOILERS FOR BOTH UNDERTALE AND DELTARUNE. GO PLAY THOSE GAMES IF YOU HAVEN’T. OR DON’T. BUT PLEASE DO THEY’RE REALLY GOOD.

Undertale is probably my favourite game ever. Look, I don’t claim to be a Hardcore Gamer™ who’s played every good game in existence. Still, Undertale struck at what I think is the most meaningful quality of games: the ability to be curious. It’s fun to be curious about all the STUFF in Undertale. But at some point you ask yourself the same thing that Asriel asks: “Don’t you have anything better to do”? We want to find all the content in video games, we want to solve all the mysteries, we want to milk them until we have nothing left to obsess over. Undertale puts a lampshade on this instinct of gaming, and for that I think it’s brilliant.

Three years after the ridiculous success of Undertale Toby Fox is back at it with Deltarune Chapter 1. Deltarune also has plenty of little things to be curious about, but let’s be honest. Deltarune isn’t about having the most things, and it doesn’t have to be.

Toby Fox knows better than all of us how much people obsessed over Undertale. To that end Deltarune‘s release had a little fun with their curiosity. 24 hours prior Fox made cryptic tweets about how he “want[s] to make something new“. Then came Deltarune, which first advertised itself as a “survey program” and urged people not to post anything about it for the first day. This did help reduce spoilers, but Fox obviously knew some folks wouldn’t be able to hold back. Even though Undertale questions the obsession with finding every last inkling of content in games a lot of people still flocked to it purely because it had a lot of stuff. So yeah, of course people will want to blabber about all the things you can do in Deltarune.

This isn’t just an Undertale fandom thing. Fans in general like to condense their beloved stories to “this happened, and then this happened. And OH! This happened too”. Sometimes to the point where they don’t even talk about why they like those things. Undertale just gets a bit more of it because knowing everything that happens requires investing in several playthroughs. Killing everything in the genocide run is a chore, but if it means getting that extra ending then by gosh folks are gonna’ do it. And that’s fine. It’s not like Toby Fox is stopping you from playing the game he made. Though at some point you might ask yourself whether it’s actually worth it. Maybe it is, but it probably isn’t. You’ll probably find it’s less frustrating to just put the game down and do something else.

I went into Deltarune hoping for something juicy and complicated. And boy does it tease you. You start the game by building a custom character. Sounds fun! You name them, you choose how they look, you mould their personality, and if you’re morbidly curious you can even tell the game that you’re disgusted or afraid of your own creation. Your character is done, and then… it’s erased from existence. Deltarune doesn’t mince words: “No one can choose who they are in this world”. This is the story of Kris, and if you were hoping you could play with their fate for kicks you’re out of luck.

Deltarune takes pleasure in dangling the carrot of choice in front of you. Susie asks if it’s okay for you to do an entire group project. No matter how you respond it doesn’t change anything. Susie repeats the sentiment from earlier: “If you haven’t gotten it by now… Your choices don’t matter”. It only takes ten minutes to realise that your curiosity won’t get you as far as it did in Undertale. And it doesn’t stop there. Wanna make a goofy robot enemy? Go for it, but every design blows up before you fight it. Were you hoping to do a genocide run? Too bad, your companion Ralsei is a kind-hearted pacifist who pushes you away from it. Plus you can’t kill enemies. Also even if you could they can totally just respawn.

The choice to willingly be a pacifist itself is scrutinised. As Susie puts it: “sometimes there’s people you just gotta fight”. The King takes advantage of Ralsei’s compassion to heal himself, and it’s only when he finds himself usurped that his threat is vanquished. In the world of Deltarune kindness is powerful, but you’re not going to erase all bad faith with it. Undertale gives you the illusion of playing god before sweeping it out from under you. Deltarune, on the other hand, leaves you looking kind of silly for even thinking you’re entitled to that power (which is fair to be perfectly honest). Guess you’ll just have to play the story in front of you.

A day after the game came out Toby Fox laid everything bare. He can’t answer your questions about the story because he doesn’t know what the completed Deltarune looks like either. He can’t even guarantee that the remaining chapters of Deltarune will ever be finished. But he can tell you how many endings the game will have: Just one. He comes straight out by saying “No matter what you do the ending will be the same”. I can’t say I wouldn’t have loved all that content, but this is Toby Fox’s game. Toby Fox is allowed to make a game that’s just a clean-cut narrative. Is that an inherently lesser game? Absolutely not. You can make a bad game with multiple stories, and you can make a game that just tells one story really well. To that end Deltarune happens to be just as beautiful and charming as Undertale was.

None of this is to say that Deltarune lacks rewards for curiosity. There’s a secret boss, and just as many objects and people with quirky interactions, and best of all tons of shameless Undertale fanservice to be found. What it does say is that Toby Fox maybe thinks it’s a good idea not to burn all your curiosity on his oh so sacred texts.  It’ll royally suck if Deltarune never gets finished, but the earth will keep spinning. Maybe another game will take Undertale from my all time favourite slot. Then maybe THAT game will be topped by another game. Good stories will keep being made, you just have to give them your curiosity.

Did you like this piece? If you wanted to commission me to write about something message me on Twitter @BristleBristle. TV shows, films, anime, western cartoons, whatever you want! You can find more details here.