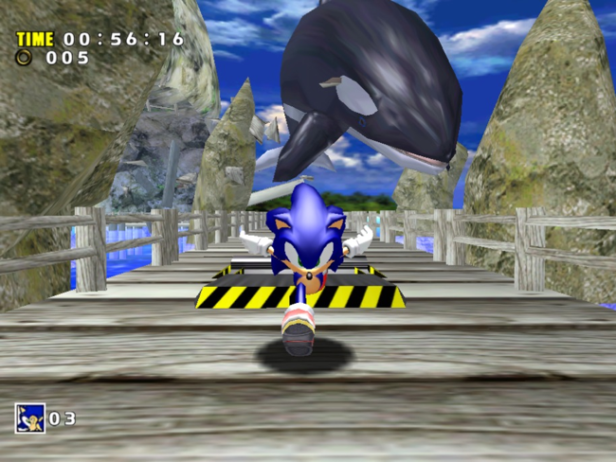 Sonic is… well, Sonic. Very few things can compare to the way people react to Sonic. The adoration, the hatred, the obsession, the ridicule. For a lot of years I was an outside observer of the strange roller-coaster phenomenon of Sonic despite dabbling in most of the games. But thanks to the stellar Sonic Mania I’ve become genuinely hooked. I’ve been able to fully appreciate the original games for being truly great platformers but probably more importantly I’ve started to find the personality of the series endearing – quirks and all. So here I am with that mindset getting into the nearly 20 year old Sonic Adventure for the first time.

So it’s probably worth noting before I continue that I played the DX version, but only the original Sonic Adventure content so it doesn’t really make a big difference. (EDIT: Yes I am aware of technical issues in DX but that doesn’t have a whole lot to do with what I’m talking about).

Sonic Adventure is a pretty fascinating beast, a weird product of its time with a lot of things going on and varying degrees of success at pulling them off. One thing Sonic Adventure really does well in the jump to the third dimension is making Sonic feel like a part of the world around him. Although it takes some getting use to his movement is tight and responsive, especially the jump dash which gives the same kinetic feeling of jumping on enemies in the original games in a much bigger space. Speaking of space that’s another thing that Sonic Adventure mostly does really well. To this day its levels are beautiful, efficiently built to handle Sonic’s 3D movements while also being nice to look at and generally fun to traverse. The visceral feeling of powering through these stages is fairly solid…

…except when it’s not.

Look, I’ll give Sonic Adventure credit. Building a character made to be as fast and as flexible as Sonic in a proper three dimensional space is super tricky. There’s so much to account for in even trying to make the character half as functional as he is in a 2D space. And there are a handful of moments in Sonic Adventure that truly feel like the best Sonic The Hedgehog has to offer. But outside of those moments you get a whole lot of design clarity issues that are plain frustrating. You’ll be happily zipping through a stage when suddenly you find yourself dying over and over, not necessarily because you’re up against a nuanced challenge that really rewards you for getting better but because the surroundings are hard to comprehend because of camera issues or slippery obstacles that throw you off guard or a combination of the two. This especially became an issue wrestling with the wooden snake in Lost World where I would find myself missing jumps because I couldn’t figure out my bearings. Also the controls. Mapping several things to two different face buttons really isn’t good design sense. It’s just not. It’s clustered and it’s a serious slip-up waiting to happen when you’re trying to do one thing but you end up doing another.

These clarity issues become especially egregious in the overworld sections. I flat out dislike the overworld of Sonic Adventure. I don’t dislike the concept but I dislike pretty much everything about its execution. There’s not a whole lot going on, its design is baseline and vapid, and I would end up lost trying to find an item I needed to get to the next actual level. Maybe it’s my bloody awful sense of direction but if I’m going to get lost in between important sections of a game I’d at least appreciate something engaging to get lost in. I feel as if something like the jungle section would be a lot more engaging to take a detour through if there were some worthwhile side-quests or easter eggs or really anything (also maybe some less ugly shades of green and brown). Of course Sonic Adventure does have the Chao Garden but throughout the time I was playing I rarely felt compelled to go there, mostly because I didn’t know where to begin with it and didn’t want to put in the energy to go there on the map (and before anyone who loves the Chao Garden gets upset with me do understand I’ve recently played a lot of Chao Garden in Sonic Adventure 2 and I’ll definitely have something more meaningful to say about it if I ever get around to talking about that game!!)

I guess the saddest thing to me about Sonic Adventure is how much it pales as a platformer compared to the rival Super Mario 64 from two years prior. There’s an argument to be made that the original Sonic games are just as if not more polished than the original Mario games, but comparing almost any 3D Sonic game to any Mario game since then it’s really hard to argue that Sonic stands a chance. And it’s not because Sega are less competent game developers than Nintendo. It’s that, as I said before, Sonic is such a hard character to pull off authentically in a larger space. But even then Sonic Adventure just isn’t as polished as a game like Mario 64.

This becomes apparent when you start to deal with characters besides Sonic. Tails and Knuckles, and to an extent E-102 Gamma, are fun characters who are super easy to pick up and immediately get a feel for. But the more you play with them the more they start to feel floaty. Flying and gliding with Tails and Knuckles respectively can feel like cheating your way through levels that weren’t designed for them, which also inversely makes it easy to stumble somewhere you didn’t mean to stumble. E-102 Gamma sections have the makings of a solid shooter but the character needs a tad too much fiddling to do what you want it to do which can break the sense of agency, not to mention the agitating time limit. And Amy and Big sections just don’t have much of an interesting identity, becoming more of an annoying obligation than anything.

Throughout these stories you see the constant repeating of the same few cutscenes and sequences with only slight variations from each different perspective. Heck, you end up doing several of the same boss battles across all six characters. This all exposes an incredibly thin narrative under all the flashy pretense and a bunch of deeply mediocre bosses that only require you repeat mundane attack patterns until you deplete their health bars. All in all it tries to be a lot of things but only really succeeds at a few of them.

Another thing it tries to be is trendy, and it’s about as trendy as a late 90’s game could be. I’m hardly the first person to notice this but it’s quite humorous to look at the evolution of Sonic The Hedgehog from a cool thing to a thing that tries to be cool, and boy does Sonic Adventure try. The modern rock theme song by Crush 40 along with all the original character themes complete with lyrics, the tacky voice acting just for the sake of having voice acting, the hilariously excessive character animation in cutscenes. All of these are shameful relics of a bygone era, and yet another thing that dates this game far more deeply that anything a Mario game would ever do. Of course given the whole idea of Sonic is that he’s meant to be cool they can’t really help continuing to try. But, well, it’s not really cool.

That might sound like I’m talking badly of the game but honestly I love how painfully late 90’s it is. I find all the music tracks goofy in a really endearing way, and I sincerely like them more than the fundamentally good instrumental tracks (specific mentions to the aforementioned main theme and the character songs for Tails, Amy and Knuckles). When the dated architecture of this game isn’t irking me with its level design and camera angles it’s making me laugh at Sonic’s half-hearted proclamation of “Watch out! You’re gonna crash! Aaah!” while he stares stiff and slack-jawed at Tails crashing into the beach. Sonic as a franchise has lost so much of its ability to be taken seriously over the past two decades, but that’s okay. Sonic is its own strange and funny and occasionally awesome thing, and over time it’s come to embrace that in a way that’s welcomed genuinely great experiences like Sonic Generations and Sonic Mania. Sonic Adventure is just one tiny piece of the ginormous franchise but it’s an important one that’s special to people for a wide range of things.

So do I think Sonic Adventure is a good game? Not really… kinda sorta… maybe. It’s a game with some serious fundamental problems that can break the experience for a lot of people, and I don’t really plan on coming back to it any time soon. But I’m glad I played it. I’m glad I got to experience a weird seminal part of the Sonic series from top to bottom like this. If you love Sonic Adventure for whatever reason be proud of it. If you hate it be proud of that too (as long as you’re not, y’know, a jerk to people about it). But however you feel and however I feel it counts for something that I’m here willing to talk about this game. I guess you’re alright, Sonic Adventure.

Did you like this piece? If you did and wanted to commission me to write about another show or film or pretty much anything message me on Twitter @BristleBristle. Pricing begins at $5. You can find more details here.