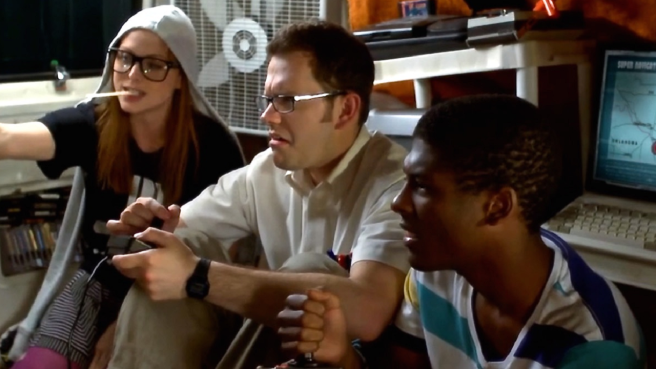 The final scene in ‘Angry Video Game Nerd: The Movie’, playing as the credits roll, depicts The Angry Video Game Nerd, played as always by James Rolfe, doing his long-awaited review of the E.T. video game on the Atari 2600, the biggest financial failure in the history of gaming and widely believed to be the outright worst video game of all time. It’s a bit of an underwhelming review, but maybe that’s the point. After going through the usual Nerd schtick of foul-mouthed wordplay set to his frustration as he plays the game, he admits at the end that he truly doesn’t personally feel that E.T. is the worst video game of all time, or even close to it for that matter.

Anyone who has closely followed Rolfe’s series at any point this last decade would know how much his fanbase has pressured him to do this review, and even for those who don’t there’s a montage containing a plethora of video requests from all around the word at the beginning of the film that brings you up to speed with the context quite nicely. Rolfe has likely held it off for exactly the aforementioned reason that he doesn’t have a whole lot of hatred for it, but Rolfe isn’t someone to disappoint his fanbase. He could have done a 10-30 minute video on the game where he desperately phones it in to please his fans and parrots the general consensus on the game, but his dedication to his fans won’t allow him to. I’ve always admired James Rolfe for his passion and sincerity in giving his fans what they want, and yet this grand 2 hour long pulp film takes the cake.

Angry Video Game Nerd: The Movie is all at once a love letter to film, to gaming and to the Angry Video Game Nerd fanbase that has grown this past decade, one that’s truly a pleasure to see as someone who managed to watch and adore every last one of his AVGN videos roughly a year and a half ago. Original creator, co-director, co-writer, co-producer, co-editor and star James Rolfe, operating on a tight budget of roughly $325,000 earned through Kickstarter, set out to make a passion project in which he could fulfil his own desires as a filmmaker while also giving his fans the honest E.T. video game review they’ve asked for. What ensues is a highly self-indulgent but ingeniously crafted manifestation of B-grade film tropes from Action to Sci-Fi to Military to Horror to Kaiju.

We follow The Nerd, accompanied by his co-worker at “GameCops”, Cooper Folly (played in charming B-grade fashion by Jeremy Suarez). A company crudely named ‘Cockburn Industries, Inc’ has made an intentionally dodgy sequel to “Eee Tee” (Eee Tee is literally just the E.T. game with a crude moustache put over E.T.’s face on the title screen mind you, whether for legal reasons or for the sake of B-grade humour I do not know). As a result his fanbase pressures him even more to review “Eee Tee”. In response, The Nerd and Folly set out to New Mexico, along with the help of Cockburn Inc. employee Mandi (played by Sarah Glendening, also in charming B-grade fashion), to disprove the theory of the buried “Eee Tee” cartridges (Ironically enough, this theory was proven to be true for the real E.T. game very shortly after filming was completed on this film). From then on we get treated to an epic journey revolving around the craziest crackpot alien conspiracy theories that human thought can comprehend. One of the most notable things about this setup is that it’s the first truly concrete separation of the Angry Video Game Nerd character from James Rolfe as a person. The Nerd has his own life and his own thought process, one much more in line with the stereotypical nerdy way of thinking, certainly not the thinking of a married man with a child such as Rolfe.

As constantly aforementioned, there are oodles of wonderful B-grade pulp in here. Most notably in the climax of the movie is the use of ridiculous animatronics. Rolfe himself said that the choice to use animatronics, despite how much time it would consume, was a way to bring the audience in to the nuances of film making, to let them in on his passion while also giving a few good B film laughs. This isn’t quite the same experience of immersion as Stanley Kubrick’s ‘2001: A Space Odyssey’, a film that immerses you because of the authenticity and believability of every last detail, but it’s nonetheless a form of immersion. As Rolfe’s friend Doug Walker, otherwise known as The Nostalgia Critic, said about the movie, the immersion is simply in the visceral feeling that the physical presence of the objects gives, even if they’re obviously miniature representations. As also mentioned by Walker, CGI is sparingly used in the film, and due to that there’s a sort of balance between legitimate effects and crude effects, further enhancing that abstract immersion.

As icing on the cake we’re treated to a number of cameos, from long time staples of AVGN and Cinemassacre.com like Kyle Justin and Mike Matei, fellow YouTube celebrities such as Andre Meadows from Black Nerd Comedy, Pat the NES Punk and the aforementioned Doug Walker, and an extra special cameo from the developer of the E.T. game itself, Howard Scott Warshaw. Each one managed to add their own light touches to the movie, if just for some through the fun of their sheer presence.

As goofy and pulpy and B-Grade as Angry Video Game Nerd: The Movie can get, I truly believe it to be an amazing accumulation of James Rolfe’s life work as a gamer and filmmaker, and an absolute treat for any fan of Rolfe and his Angry Video Game Nerd character. I truly hope that The Nerd can continue to take me and all his other dedicated fans back to the past to play the shitty games that suck ass for a long time.